Ground-source heat pumps are commonly used in North America and parts of Europe as well as Japan, and are beginning to be introduced to other regions like the United Kingdom. Currently, heat pump systems are 30% to 40% more efficient than alternative approaches to heating and cooling. Using conventional electricity to run the pump results in a primary energy efficiency of 120% to 160%, with CO2 emissions of 0.20 to 0.27 kgCO2/kWh heat), while using green energy (such as solar power) results in 300% to 400% energy efficiency and zero CO2 emissions. This can be compared to efficiency ratings of 60% to 65% and 0.45 to 0.48 kgCO2/kWh heat for the least efficient commonly used heating system, the gas boiler.

There are currently a number of common heat pump designs in use, including ground-coupled heat pumps (which sink the exchange coil into a vertical borehole); the surface water heat pump (which uses a standing body of water for heat exchange); and the ground-water heat pump (which uses two drilled wells as source and sink). The type of system used is dependent on several factors, including local geography and temperature extremes; for example, the basic ground-coupled heat pump design works best in environments where temperature is consistent year-round. The basic schematics for each of these styles of heat pumps are shown in Figure 1. Yang et al provide extensive mathematical formulae for the exchange functions, capacity, and resistance of ground-coupled heat pumps as well as a method of computer simulation that allows for determination of capacity. They also note that hybrid ground-coupled heat pumps are becoming more common, as they expand the system’s ability to cope with widely ranging temperatures. These hybrids can include changes to the design such as including a supplemental heat rejector to increase cooling capacity; a desuperheater to allow for hot water supply (thus reducing the total cost of the system); and adding solar power to run the pump and eliminate grid power. The ground-exchange heat pump is likely to be a design that will be further improved in coming years as the demand for small-footprint systems grows.

Two major concerns in the current use of ground-source heat pumps, as with other sources of heating and cooling energy, are energy utilization and carbon dioxide emissions. Each of these has been the subject of some research.

The average CO2 emissions from heat pumps varies widely depending on the design of the pump, the source of energy used to power it, and the conditions it is being operated under. However, Blum et al’s study in Germany revealed that there were regional variations in CO2 emissions; as Germany is one of the regions that has made the most aggressive use of ground-source heat pumps, this is a useful study for comparison. This study compared 1,105 different heat pump installations. The authors found that the CO2 emissions savings compared to traditional heating methods ranged between 35% and 65%, with emissions being 149 g CO2/kWh assuming a national energy mix (based on both renewable and fossil fuels) and 65 g CO2/kWh using a regional mix (which was more heavily based on renewables). This suggests that the CO2 emissions efficiency is significantly reduced from the average fossil fuel based heating system, offering a substantial improvement in this area. The authors also indicated that other studies had found savings of 15% to 72%, depending on region and regulations used to monitor CO2 emissions. The authors suggest that assuming a steady rise in the use of ground-source heat pump systems, the amount of emissions from heating and cooling is likely to be reduced substantially over time.

The main problem with energy usage is in regions where there is a wide difference between the heating and cooling seasons in terms of temperature. The study conducted by Fan et al focused on a region of China where there is this substantial difference in order to identify issues in performance. The author’s theoretical study of the exchange performance of a ground-source heating system over the course of the year found that the loss ratio of cold energy was 27.63%, indicating a relatively high efficiency, and that the system transferred 71.505% of power consumption during the daytime to night-time. This shows that the use of ground-source heating and cooling is substantially energy-efficient compared to other options even in conditions where there is a highly variable temperature.

One of the major problems with heat pumps as used today is that they are dependent on suitable geography (such as available groundwater, for ground-source heat pumps in regions with widely variable temperatures). Kalz et al describe a system that uses two rainwater cisterns as exchange source and sink rather than groundwater sources. This design, created for a German Passivhaus design, is intended to be as energy-neutral as possible while still providing a comfortable environment. This system, shown in Figure 2, uses 11m2 rainwater cisterns for heating and cooling. These cisterns, in comparison to a borehole-based design, only require excavation depth of 2-3m, and as they are placed under the house, significantly reduce the footprint of the system. This type of system is clearly dependent on rainwater collection, so would not be appropriate for drier climates, but it does provide effective heating and cooling for the Passivhaus design, which is intended for a cooler temperate environment. Thus, this type of design could become increasingly common for residential buildings. 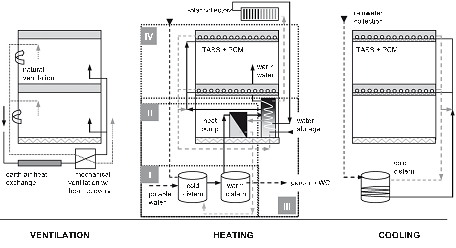 Figure 2 - Systems for a Passivhaus Design

There are also other on-going developments in the choice of water sources for ground-source heat pump systems. One development is the use of raw water, or environmental water prior to its treatment in a water treatment facility. In this system, raw water was used as the heating and cooling source for a water treatment facility. Figure 3 shows the system design schematic for the plant and its water treatment system. This system is not perfectly efficient; in particular, the compressor performance in conditions where there is a very low part load (as there is in this case during the heating system), and the temperature differential in the water are not sufficient during this period to improve performance. In particular, loads that are under a third of the full load result in falling compressor volumetric efficiency. Below 15% of the full load, the power requirement for the pump is double that of the full load. This shows that the design of the raw water facility is not yet perfect, and may require improvements particularly in areas with widely varying load requirements, since this will invariably lead to conditions where there is a significant loss of efficiency. However, this design is promising for the development of future systems where there are alternative water sources available, and may in future be applied to situations other than the limited application to water treatment plants. 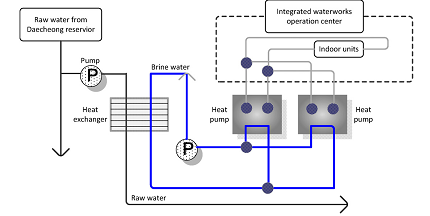 Heat pump systems are not only for use in residential and commercial heating and cooling. One major infrastructure problem that they have been applied to experimentally is recycling of storm water runoff. Storm water runoff poses a problem of growing proportions in cities, where traditional approaches like channelling runoff from paved areas to nearby watercourses are becoming overloaded and ineffective. The most common approach to dealing with this problem is the use of a permeable pavement material (PPM), which allows runoff to sink below the paved surface and be absorbed into the groundwater system; however, this can lead to pollution in some areas due to problems such as sewer system drainage issues, leading to high bacterial loads in runoff. The use of a heat pump in conjunction with the PPM, which creates an inhospitable environment for bacteria, greatly reduces the bacterial load and allows for runoff reuse. This is one of the ways that heat pumps could challenge existing notions of environmental management in the coming decades.

The use of ground source heating and cooling systems in various designs is likely to accelerate rapidly due to increasing cost of fossil fuel heating and environmental concerns. This will require substantial improvements in existing designs to improve their efficiency in various climates and geographic conditions, as well as to increase capacity of low-footprint systems for use in heavily populated areas. Innovations like improvements on the basic ground-coupled heat pump design or use of rainwater and runoff to facilitate heat exchange are likely to dramatically improve the effectiveness of these systems over time. Ground source heat pumps also show some promise for other applications, such as treatment of runoff. Within the next ten to twenty years, it is likely that ground source heat pump systems will be, if not a dominant choice for heating and cooling, certainly one of the most prominent types of systems in use in both commercial and residential new building. They are also likely to become increasingly important for infrastructure systems such as storm water treatment.