Mankind's existence is based on water. Water covers approximately 3/4 of the surface of the earth. Unfortunately, 97% of this water is salt water and cannot be consumed in its natural form by people or most animals. The remaining 3% of the water is in lakes, rivers and groundwater as well as the atmosphere. Often, human communities are distant from the 3% of naturally potable water. The oceans offer an endless supply of water, but the salt must be removed. The removal of the salt from ocean water is known as desalination. Historically, man has used water from lakes, rivers and groundwater due to the high energy cost of removing salt from seawater. The Middle East is an area which has little naturally potable water but large energy reserves in the form of oil. As of 2007, desalination plants in the Middle East accounted for three fourths of the world’s desalinated water. The United Arab Emirates has the world's largest desalination plant which can produce 300,000,000 m³ of water per year. This plant is named Jebel Ali. Tampa Bay, Florida has the largest desalination plant in the United States. This plant is capable of producing 95,000 m³ of potable water per year. 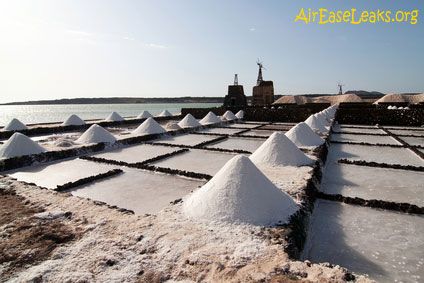 Multi-stage flash distillation accounts for 85% of worldwide desalination. This involves passing seawater through a heated area and turning it into steam. The steam is then collected and consists of desalinated water. Membrane processes have become more popular recently. These processes have become more popular because they require less energy than the more traditional thermal distillation method. All of the thermal distillation methods require water to be heated. This requires a great deal of energy. The membrane processes only requires that water be pushed through the membrane. This still requires a great deal of energy, but not as much as the thermal method.

Basis for the System

The desalination system proposed in this paper is based on a system recently developed for the Canary Islands. The Canary Islands has approximately 2300 ha of fields producing vegetables and tomatoes. The area receives less than 250 mm of rain annually. Local laws require that the population living below an altitude of 300 m receive their water from a desalinated source. The population of the island is growing at approximately 6% yearly. This situation precipitated a state-of-the-art desalination plant being commissioned in 2002 which uses renewable resources.

The system proposed in this paper, like the system in the Canary Islands, will use wind power. Wind turbines will convert air turbulence to electricity. This type of energy production has become more efficient and the average wind power generator now produces over 120 GW. In fact, 1.5% of the world's electricity is now produced with wind power.

One challenge with using wind power is, in most areas, the intermittency with which the wind blows. Traditionally, wind power has been used to provide a portion of the energy and the main electrical grid provides the rest. Larger wind power plants frequently distribute any excess energy back into the grid when the winds are high. The Canary Islands have nearly constant wind and the desalination plant there frequently gives energy back to the grid.

The proposed system will use two wind generators identical to the four used on the Canary Islands. Two wind generators will be capable of producing 1.32 MW of power. Each generator has a rated power capacity of 660 kW. There are three blades which have a diameter of 47 m. Each blade is approximately 23 m long and weighs 1250 kg gram. The blades are made of epoxy reinforced fiberglass and begin operation with winds as low as 4 m/s. For safety reasons, the system shuts down when wind exceeds 25m/s. Each wind tower is 40 m high.

Assuming that the system proposed in this paper is used in an area which has winds similar to the Canary Islands, the average yearly energy production by the two wind generators can be expected to be around 5,000,000 kW. This level of power should exceed the yearly energy cost of the desalination system which is likely to be around 4,000,000 kW, if it is serving a population similar to that in the Canary Islands.

The desalination system can be conceptualized as consisting of four stages. The first stage is pumping the seawater into wells. The second stage is pretreatment of the water. The third stage consists of using a high-pressure pump to push the water through osmotic membranes. The fourth stage consists of storing and distributing the water.

Pretreatment of the Seawater

The seawater in the wells is not appropriate for use with the membranes and must be pretreated. The first step in pre-treating the water is to run the water through sand filters which remove suspended solids. Four closed and pressurized sand filters should be sufficient for the proposed plant. With a filtration velocity of 12 m/h, a layer of 0.9 mm of sand followed by a 0.5 mm layer should be sufficient. Filters can be back washed as needed to keep them running efficiently. For a final pretreatment step the water will be passed through 520 µ cartridge filters.

As in the system on the Canary Islands, the proposed system will consist of two concurrently running streams of water passing through the reverse osmosis membrane. A high-pressure pump will force the water through Hydranautics SWC3 membranes. This will provide approximately 740 ft.² of membrane area. These membranes are energy efficient, yet excellent at removing sodium chloride from the water. The entire system is expected to be energy efficient requiring less than 3 kWh/m3 of potable water.

The desalinated water will be stored in a sealed well capable of storing enough water for seven days use. While this will require a large underground storage tank, it is necessary due to the possibility of the plant being inoperable in low wind. The water treatment plant will have a line into the well accessing water as needed. This arrangement will decrease, and perhaps eliminate, the need to use electrical energy from the main grid. Excess energy from the wind generators will be stored in large batteries at the plant and also used to mitigate the effects of low winds. Neither of these options was used on the Canary Islands necessitating occasional use of electricity from the main grid.

The energy efficiency of the proposed desalination plant should be similar to that used on the Canary Islands. It is likely that the plant will be self-sustaining and not require energy to be taken from the main power grid. Also, the wind power creates no emissions. A similar desalination plant, using traditional thermal methods, would require the energy from more than 34,000 L of heavy grade oil per day. Emissions from the traditional plant would amount to more than 11/2 tons of sulfur dioxide yearly.

The proposed desalination plant powered by wind is ideal for a small island community. The surrounding ocean would provide an endless source of salt water. Many ocean islands have persistent winds. This wind can be used to power a desalination plant if it is energy efficient. The traditional desalination plant, which requires heating the water until it becomes steam, consumes vast amounts of energy. Wind would not be sufficient to power this type of plant. However, advances in membrane technology have provided polymer compounds which can be used in filters that remove salt from water with a minimum of resistance. Passing water through these membranes requires a small fraction of the energy necessary to heat the water to steam. Once the water is passed through these membranes it is desalinated.

The only drawback to wind energy is its variability. This can be controlled by a multitude of options and two are suggested. The first is storing a large amount of desalinated water in an underground reservoir which would hold a 7 day supply of water. The water supply could be accessed if the plant is not operational due to low wind. Another method of normalizing the affect of variable winds is to store the excess energy produced in batteries. The plant can access the batteries when power from the wind generator drops below what is necessary to run the plant. As a precautionary measure, the plant should be able to access energy from the main electrical grid. However with the stored water and batteries is not likely to be necessary.

By using renewable energy resources when possible, we can all make a difference in the health of our planet.