a. The heat island hypothesis is based on the idea of heat absorption by the dense concentration of heat-absorbing materials in a city, heat-exchanging machines (like automobiles and air conditioners), and little plants for cooling, which brings the temperature up around the city; this effect causes hot air to rise and then cool, condensing clouds out of the atmosphere.

b. The second hypothesis is based on convergence, or collision of air surfaces caused by disruption of air flow across a city. This effect, which is caused by the tall buildings in a city, pushes surface air into the atmosphere where it then condenses and forms clouds. The third hypothesis is that the city’s buildings split the storms that form around it, either physically or because of the heat island effect described in question a.

c. The accuracy of rainfall results from satellite data were checked by physically measuring the rain that fell around Atlanta, the place where Dr. Shepherd was doing the research. He used rain gauges to measure rainfall at various places around the city, and then compared these findings to the findings provided b the satellite in order to make sure they were correct.

d. Shepherd’s experiments first compared historical data to present data, which showed that Houston rainfall had increased following urbanization, and that the timing of storms had also shifted.They then modeled the city based on their findings, and found that the city appeared to act as predicted by the convergence theory (the second theory), with the air splitting and then coming together on the other side of the city to form storms; this was consistent with the actual findings of the research. The experimental findings were convincing.

a) The animal chosen for this discussion is the dhole, or Asiatic wild dog. The dhole is a social pack mammal similar to the domestic dog (a canid species) (Durbin, n.d.). Its scientific name is Cuon alpinus. The dhole is around 90 cm in length and 50 cm in height at the shoulder, or the size of a small domestic dog. It has a red coat with black paws, although there are several subspecies with different colorations. Their vocalization range is wide, including a communication whistle. They range across India and southern Asia, including through multiple types of forest and alpine steppes, and their primary food source is small animals and ungulates (deer) they share their range with. 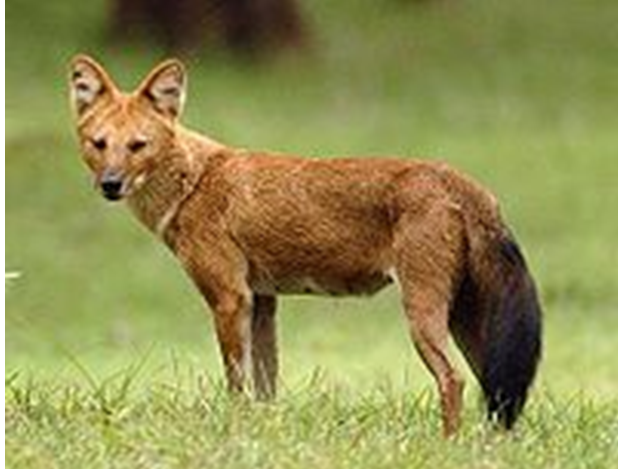 b) The purpose of choosing the dhole is to bring attention to an organism that is not well known. Even though the dhole is very endangered, it does not receive much attention in the press or in conservation efforts (Durbin, n.d.). However, as a highly social canid species that may be the ancestor of our own domestic dog species, I think it is a highly important species and should be better known.

a) The table below shows the different calculations for each of the three calculators that were used.


b) The Water Footprint Calculator found that food was the highest category that contributed to the water footprint for both male and female consumers, with meat being the majority of the water consumption accounted for in the food category. The RWPC calculator did not break down water usage by specific categories, but only gave a specific figure. The Zerofootprint calculator calculated bathroom usage as the highest usage.

c) The Web sites were more likely to be accurate based on the amount of information they asked for. The Zerofootprint and RWPC calculators asked for a similar amount of information, including frequency of various water-using activities, but did not ask for income; in contrast, the Water Footprint Calculator asked for income level and food consumption as well as gender, but did not ask about specific water consumption activities. The relevance of the questions involved are likely to be indicative of the accuracy of usage – the income of an individual is not as directly related to water usage as the amount of time spent showering or other water usages. Thus, the Zerofootprint and RWPC calculators are likely to be more useful than the Water Footprint Calculator.

d) Some of the invalid assumptions that may reduce the usefulness of this way of assessing water footprint could include inaccurate assumptions on the part of the calculator as well as inaccurate recollection of the type of activities that are undertaken by individuals (or lack of knowledge about them). Inaccurate assumptions could include assumptions regarding gender-related usage of water (as seen in the Water Footprint Calculator) or assumptions about washer capacity, shower flow, or other standard issues involved in calculation of water usage. For example, if one had a compact dishwasher, it could only use half the water of a regular dishwasher. Personal recollection of activities could also affect the accuracy; if I don’t know how many times I wash my car or miss-estimate the amount of time I spend in the shower, the results could be wrong.

e) There are a number of lessons that could be learned from these activities. From the Water Footprint Calculator, you could learn the impact of your eating habits on the amount of water that is used on your behalf – that could convince you to eat less meat, which would increase sustainability through reducing the agricultural load. The most useful calculator for learning is the Zerofootprint calculator, which displays everything on one page, so you can directly see the effects of changing your habits on your water usage. That would let you draw solid conclusions about how much water you use and how you can best reduce it (even if the figures are only estimated).

f) I would recommend the Zerofootprint calculator to friends and family, because it is the easiest to use and because it provides the best insight into the ways that you can change your habits and conserve water. This is because it is all on one page and changes happen immediately, letting you make immediate changes and see what effect they have.

b) The minimum educational requirement is a bachelor’s degree in earth science or a related area of study. That only suffices for entry-level positions, however, and in order to perform advanced research or to provide more complex consulting services, a Master’s or PhD is preferred. Other requirements include teamwork and computer skills.