The ozone-forming process is different in the troposphere, closer to the earth’s surface (although some is transported downward from the stratosphere). In the troposphere, oxygen reacts chemically with hydrocarbon and nitrogen oxide gases as well as other substances, both natural and man-made. Pollution, largely produced from the use of fossil fuels, is a great contributor to this tropospheric process, and the increase in pollutants has decreased tropospheric ozone over the last century. Sunlight is necessary for this process, just as in the stratosphere. Ozone is also destroyed by chemical processes here, as well as by contact with “a variety of surfaces, such as those of soils and plants”. 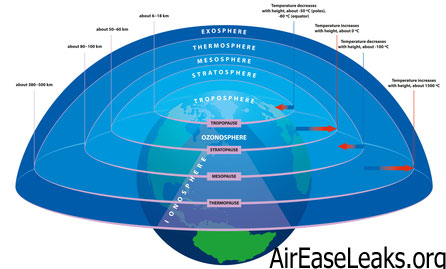 Ozone can have beneficial or detrimental effects on life on earth, depending upon its balance and where it is located. In the stratosphere, ozone absorbs ultraviolet rays. This is of significant benefit; as ozone is depleted in the stratosphere, as it has been in recent decades, “we experience incidences of skin cancer, cataracts, and immune system impairments, and plants, including crops, may be damaged”. Ozone in the troposphere is not beneficial, however, “because it is highly reactive and damages living tissue” ”. It contributes to surface air pollution, such as smog, which causes respiratory illness in people and animals.

The geosphere, hydrosphere, and biosphere can have an effect on the temperature of earth’s atmosphere. For instance, the albedo (reflection of light off of a surface) is affected by what material incoming sunlight (energy) hits on the earth’s surface. The composition of the biosphere influences this process. Trees reflect less light than cleared land. Therefore, clearing trees (as in the tropical rain forest) to make pasture or crop land increases the albedo. This additional albedo warms the atmosphere; this is currently occurring around the world and may be partially responsible for global warming. Further, this process decreases evaporation, cloud formation, and rainfall, increasing the possibility of draught. Likewise, particles in the atmosphere (as from pollution) can absorb radiation in the lower atmosphere, raising its temperature. As Allaby states, “Climate is strongly subject to feedback effects”.

The process of convection in the geosphere can also affect temperature. Mathez and Webster describe the process this way: “Thermal convection is the rising of hot, less dense material, and the sinking of cooler, more dense material. This results in slow but organized circulation of currents of solid rock that transfers heat from the hotter depths to the cooler exterior of Earth” (p. 80). It is this transfer of heat from the earth’s interior to its exterior that made the birth of life possible and created the biosphere. Convection powers the movement of tectonic plates, which enables hot material from the earth’s core to escape between plates, be forced through the mantle, and reach the surface. The resulting volcanic eruptions also release particulate matter into the atmosphere, which can have the warming effect described above or, conversely, can have a cooling effect if released in great enough quantities to block the sun’s energy from reaching the earth. Additionally, when the hot lava reaches the surface, it undergoes a change of state by cooling and changing from liquid to solid, releasing its stored energy into the atmosphere. The same energy release phenomenon happens when ice, a solid, melts and becomes a liquid. Water—the hydrosphere—requires more energy to be heated than do solid surfaces. It also releases heat more slowly. Nonetheless, the earth’s oceans are warming as the atmosphere warms, causing ice caps to melt. Less ice means more absorption of energy and less albedo, once again illustrating the interconnection of all of the earth’s systems.

The biosphere is another key component in the energy process. Human activity affects the composition of the atmosphere, which in turn affects temperature. For instance, methane gas, which is produced by the cows and sheep raised in increasing numbers for food production, as well as natural gas leaks, landfills, and other sources, “is over 20 times more effective in trapping heat in the atmosphere than carbon dioxide (CO2) over a 100-year period” (USEPA). Consequently, both methane and CO2 contribute to the greenhouse effect and global warming. The warming effect is increased when land is cleared in order to raise sheep and cattle (see above).

How is ozone formed in the atmosphere? 20 Questions: Update.