Cold region hazards refer to an area of environmental geography in which studies revolve around the types of hazards that might be encountered in cold geographic regions of the earth. These include ice jams in waterways and on roads, loss of sea ice, contamination of arctic regions, sea level impacts, changes in permafrost layers, glacier variables including floods, snow avalanches, ice storms, dangerous blizzard-type snow storms, and related issues. 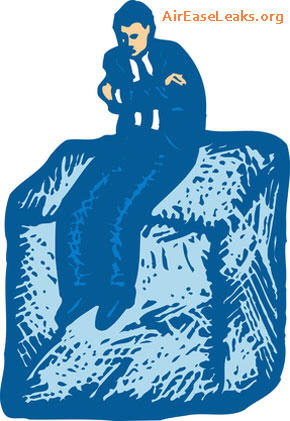 The implications of this research show that outcomes associated with cold weather hazards are therefore not as closely linked to the issue of temperature as previously thought. It makes sense, then, to examine what other factors may be involved, such as the influence of the activities occurring in human communities both in and outside of cold regions. Nelson et al. explored the factor of climate change as impacting the changes that have occurred in the permafrost regions of the earth's northern latitudes. The researchers pointedly focused on human infrastructure in northern latitudes as impacting climate change and thus the extent of permafrost. A changing permafrost extent, noted by the researchers to cover one-quarter of the land area of the earth could potentially change global climate and not just affect the cold weather regions in terms of hazards. However, cold weather hazards would also likely occur due to permafrost changes. Human habitation on ice-rich areas would be negatively affected by decreasing permafrost thickness and extent. These negative effects relate to ice change hazards (thinning ice, moving ice) and to a changing surface layer upon which human communities are built.

Zhang and Wu provided a discrete example of climate-induced permafrost change and associated factors related to human habitation and cold region hazards. The area of the Qinghai-Tibet Plateau was noted as the biggest permafrost area of the world at the lowest latitude. Using a geo-database program called ArcGIS, the researchers calculated the potential ground ice changes given different temperature scenarios for the plateau region. This analysis provided a method to assess zonation hazard. Low temperature to high temperature scenarios were correlated with resultant permafrost degradation. The researchers noted that dangers associated with unprecedented and likely human-induced climate change on permafrost layering and extent include thermal dangers, where energy transfers from one form to another. This may include landslides, sinkholes, and exponential impacts upon the surrounding atmosphere and climate because of the transfer of energy from the warming earth to the atmosphere.

The larger concept in human-induced changes on cold region hazards inherently holds the idea that there is some aspect of the human condition that contributes to degrees of negative environmental change. In this report, this focus is on anthropogenic causes associated with human population centers and activities that result in changes which may impact cold weather phenomena; here, this refers specifically to cold weather hazards.

Human induced climate change in terms of global atmospheric warming has been held to be impacting the character and extent of arctic ice. Ford et al. reported on research they conducted on the artic communities of Ulukhaktok, Churchill, and Igloolik in the northern region of Canada. The research related to ice use hazards associated with traditional activities of hunting and for human travel as well. The changing ice conditions were noted as a later season ice freezes, and earlier season ice break-ups. The factors of rising climate temperatures, and melting ice due to climate change were held to increase the hazard from ice in terms of thinning ice, and reduced sea-ice cover. Risks associated with these hazards include potential loss of hunting ground, falling through the ice, and reduced access to community hubs due to loss of ice cover for travel.

The Ford study points to micro-level impacts in communities where people depend on the cold environment for their way of life. While natural cold weather hazards have and will exist, the increasing trend of human-induced climate change and warming temperatures on the nature of ice, temperature, and water in cold regions produces an increased risk of more prevalent hazards than would seem normal. Ostensibly, the increased risk from cold weather hazards (ice loss) may likely be concluded to be impacted by anthropenic activities leading to a warming climate and melting global ice mass.

Atmospheric warming associated with human industry such as release of effluent in waterways that cause algae blooms and thus energy transfer (heat) into the atmosphere from these organisms may contribute to the overall human impact on cold weather regions.

Agricultural operations that release methane into the atmosphere, thus warming the air, may also add to the degree of cold region impacts from climate warming. Furthermore, household level activities such as gardening, landscaping, heating homes, sewage release, and more also likely lend the overall trend of climate warming that is occurring now on earth. This overall picture represents the action of entropy, where in an isolated system nature tends to go from order (the status quo) to disorder (unknown and unintended effects).

A warming climate and rising temperatures have the factual capacity to melt ice, thus releasing water in its fluid form into the surrounding environment. The exponential effects from the physical and chemical weathering processes of the additional moisture released into the environment may increase the degree of impact of cold region hazards, such as rising sea levels, increased ice flows, potential of risk from rogue icebergs, flooding, and loss of habitat for cold weather species such as polar bears and sea lions among other effects, is simply not possible to not be influenced by human communities and associated climate warming activities that change global and regional temperatures to the point of melting ice and increasing water availability in cold regions. Thus, the overall result from human activities may likely add to the degree of risk and hazard potential in cold regions where the temperature is rising and ice is melting.

Hinzman et al. noted that there has not been enough time-series data on cold region changes to properly assess the impacts from human-induced changes on cold regions and thus potential resultant hazards. This view was supported in previous research by Truett and Kertell who reported that it was difficult to set governmental environmental regulations in tundra (cold weather) regions because of the combined influence of three factors; these factors were the temperature of the soil, the availability and character of water, and the availability of nutrients. Tundra disturbances resulting from human activities was theorized to have a significant impact on the food chain, due to the increased soil temperature, increased water availability, increased nutrient load, and decreased biodiversity of native species upon which the tundra habitat was evolved for. Thus the cold region hazard of ice loss, increased water flow, and changing soil characteristics has the strong potential for a large and negative impact upon the tundra food chain, including resultant biodiversity effects.

The literature reviewed in this report has demonstrated that the degree of risk from cold weather region hazards is likely increased from human actions and the concentration and prevalence of human communities both in cold weather areas and around the globe generally.

Pearce et al. reviewed previous scientific studies on climate change and risk for an arctic settlement in Canada and USA. They noted that climate change has been documented in 420 different studies relating to the assessment. The climate changes had been reported to have affected food security, health status of inhabitants of the region, transportation, and also damaging municipal infrastructure of discrete settlements in the region. Ad-hoc human adaptations had been adopted to deal with the resultant risk of the cold region hazards of melting ice and reduced permafrost, yet ultimate outcomes for human inhabitants are unknown .

This study points to a circular argument in the assessment of human activities (and communities) on the degree and impact of cold weather hazards. The circular argument is thus: human activity has led to an unprecedented period of global warming that has been linked to industry and household level sources. Global climate warming has been noted to have impacted the character and nature of traditional cold regions, where there is already inherent natural hazards associated with such regions, such as ice flows and storms. However, the impact of the human-induced warming has further exacerbated the degree of risk of the cold weather hazards, herein reported in terms of permafrost reduction, ice melt, reduced habitat, reduced biodiversity, loss of food security, loss of transportation, and other unknown impacts. Ultimately, human-caused climate changes have increased the risk of impact from cold weather hazards, because the prevalence and degree of hazards is thus increased due to such anthropogenic changes.

The final conclusion is that the impact of cold weather hazards, such as the effects of ice loss due to climate change and reduction of permafrost as discrete example of such hazards, is likely to be greater than would otherwise be experienced by humans because of the actions of humans themselves. The overall finding from this report is that humans are held to be a major causative factor in accelerating normal processes of climate change, which in the current trend is global warming and not cooling. The effects of a warming atmosphere are felt in global weather changes, with more intense storms in and out of cold regions felt around the globe. This report has focused on two cold region hazards, that of risk from thinning and reduced ice cover, and from reduced permafrost extent and layer thickness. A hazard is defined as such because it for one, it is a human concept and related to risk and mitigation. Cold weather hazards that are increased in terms of degree of impact thus relate to a greater risk exposure that might be experienced by humans, and a greater input of resources to mitigate the potential of risks from those hazards.