Prior to September 11, 2001, structural engineers were only concerned about wind, natural disaster, fire, and explosion. The events of 9/11 brought terrorism into the structural equation. Prominent buildings represent attractive targets for terrorists, as they are considered icons of American society. Government facilities, military installations, and laboratories are at risk, as well as large and prominent buildings. Structural engineers who work on these types of buildings, or on facilities near these types of targets, must now be familiar with blast effects and progressive collapse. Collateral damage is a possibility in today's world. 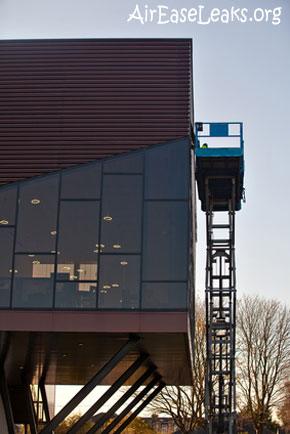 A bomb blast within a building can cause catastrophic damage on the building's structure. The structural frames can buckle, walls and windows collapse, and critical life-safety systems shut down. The structural collapse, direct blast effects, and resulting fire and smoke can cause loss of life and injury not to occupants of the buildings attacked, but also to residents or occupants of nearby buildings or even on the streets outside. Collateral damage can extend for blocks after a major attack, as we saw in the attacks on the World Trade Centers.

According to Global Security, "An explosion is a rapid release of energy, in the form of light, heat, sound, and shock wave". A shock wave, which consists of compressed air travelling at incredible speeds, radiates outward from the blast. As the blast expands, the air pressure goes down, but its surface is amplified. Although the shock wave dissipates rapidly (with time measured in fractions of sections) it is incredibly powerful. The shock wave can actually turn into a negative force, and create a vacuum. When this happens, the air will into the building, creating a very powerful wind pressure or wind drag. The wind drag can damage the structure of the building. It is also strong enough to cause debris outside of the building to launch into the air. In cases where the explosion occurred outside the building, the force of the blast is also partly diverted into the ground. In such a case, a crater is created and the shock wave occurs in the form of a ground wave. This ground wave carries the force of an earthquake (Associated Press).

The strength of an explosion or bombing acting on a targeted building or its nearby locations is extremely great and the pressur exerted upon the building is excessive. Major damage undoubtedly occurs to the structure of the building. Ironically, the explosion itself does not cause the majority of the damage: the remainder of the damage occurs as a side effect of the blast itself. The shock wave commonly causes the building to collapse.

When the Murrah Federal Office Buiilding in Oklahoma city was bombed on April 19, 1995, a bomb placed in a truck parked at the base of the building destroyed three structural supports (Nair). The loss of the supports led to a collapse of a girder, and the collapse of the girder caused the collapse of columns supported by the girder. As the columns collapsed, floors supported by the columns collaped. A general and progressive collapse of the building ensued. Nair argues that some analysts do not believe the Murrah collapse should be considered progressive, simply because progressive collapse it typically out of proportion to the force provided. While the bomb was very large, he argues – indeed, large enough to have caused damage over a several city block radius – the true test is whether or not the damage was disportionate. He suggests that the damage was disportionate in the sense that a very modest change to the building's structure could have ensured that any bomb damage would be reduced significantly (Nair).

We have only considered the collapse of three buildings: the World Trade Centers 1 and 2, and the Murrah Federal building. Yet the death toll from the collapse of these buildings and collateral damage surrounding them exceeded 3,000 victims just in these three buildings (and the collateral areas) alone. It is clear that by improving structural designs, lives can be saved, even when the failures occur as the result of malicous and directed actions. Structural engineers can help save lives though the careful application of engineering design techniques. Applied with an eye towards both esthetics and safety, structural design techniques can make the world a safer and more beautiful place.